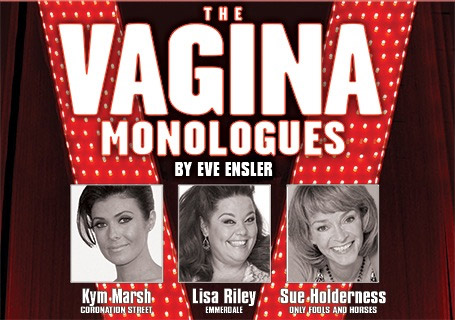 “Spellbinding, funny, and almost unbearably moving…..it is both a work of art and an incisive piece of cultural history”

“THE ULTIMATE GIRLS NIGHT OUT” the poignant and hilarious tour of the last frontier, the ultimate forbidden zone, The Vagina Monologues is a celebration of female sexuality in all its complexity and mystery.

Based on author Eve Ensler’s “Vagina Interviews” conducted with over 200 women from all around the world, this hilariously witty and moving collection of tales give voice to a chorus of lusty, outrageous, poignant, brave and thoroughly human stories.

A staggering number of the world’s most famous and talented women, from Kate Winslet and Whoopi Goldberg to Sophie Dahl and Jerry Hall have chosen to take part in the show, performing in both New York and London.

“A startling piece of theatre, it rubs the funny bone, sometimes gently, sometimes violently, it alternately warms and saddens the heart.  It occasionally shocks the sensibility, it sears the soul, it deserves to be a sell-out again on wildfire word of mouth.  An indelible theatrical experience, which is both a work of art and global phenomenon” Daily Mail